Sports that created the greatest fans of all time

You know Memphis as a training ground for music legends and a championship bracket for barbecue. Truth is, we’re competitive all-around.

Baseball came to the Bluff City amid the chaos of the late 1800s. A telegraph officer stationed in town, Thomas Edison, served as batboy and the home team clinched the Southern League title before the century was out. In 1901, Memphis became the charter member of Southern Association Baseball, capturing back-to-back titles in 1903 and 1904. Just one thing: Southern Association ball was for white players and fans. For decades, while the Memphis Chicks rounded this circuit, Memphis’ Negro League Red Sox were also in play.

In 1960, Russwood Park, the epicenter of baseball in Memphis, burned to the ground. The fire marked the beginning of an on-again, off-again relationship between Memphis and America’s pastime that would last until the end of the 20th century. But mid-century, other sports were on the rise. In 1958, the PGA Memphis Open came to town. In 1965, a young bowl game followed. Memphis Memorial Stadium had recently opened as home of the Memphis State Tigers. Tiger football, established along with the college in 1912, persisted, but the facility was renamed: Liberty Bowl Memorial Stadium. Next door, the modern Mid-South Coliseum—opened in 1964 as the city’s first public auditorium designed for integrated audiences—would soon host American Basketball Association games. Between 1970 and 1975, Memphis cheered for its ABA hometeam, alternately named the Pros, Tams and Sounds.

It’s possible that no fans were as frenetic as those packed into the Coliseum for Memphis wrestling (“wrasslin’” if you want to get at its true character). From the late 1970s into the early ’80s, hometown heroes like Jerry “The King” Lawler jumped into the ring against bad guys—including comedian Andy Kaufman. When “The King” thrashed Kaufman at the Coliseum in 1982, the feud went viral, proving that Memphis showmanship goes beyond the concert stage. Meanwhile in Millington, another fan favorite—auto racing—picked up speed when Memphis International Motorsports Park opened in 1986 (today, it’s known as Memphis International Raceway).

Later that decade, all eyes were on a basketball standout at local Treadwell High. By 1990, Anfernee Hardaway—Parade magazine’s National High School Player of the Year—had signed with the Memphis State Tigers. After his junior year, the two-time All-American catapulted to the NBA, while the Tigers continued playing in their new home on the Mississippi River: the Pyramid. Back at Liberty Bowl Memorial Stadium, a new bowl game was born: the Southern Heritage Classic.

By the end of the ‘90s, big changes were brewing for Memphis sports fans. Since 1968, we had been committed to a series of baseball teams, but none of the teams were fully committed to us. When the last team left in 1997, a local business leader named Dean Jernigan advanced an idea: He wanted to bring professional baseball back to Memphis—and build the fan-friendliest stadium in the sport. On April 1, 2000, the Memphis Redbirds, Triple-A affiliate of the St. Louis Cardinals, opened their inaugural season in AutoZone Park. The team, and its brand-new stadium, underscored downtown Memphis’ rebirth, and shone like a beacon to other franchise owners. Among them: NBA Grizzlies’ owner Mike Heisley, who relocated his Vancouver, British Columbia, team to Memphis with the 2001-2002 season. The Grizzlies played three seasons in the Pyramid before moving into their new home on Beale Street, FedEx Forum.

In its bicentennial, Memphis is seeing more action than ever. In 2019 the Memphis 901 FC, a United Soccer League franchise, will launch playing at Autozone Park and Anfernee “Penny” Hardaway is now Coach Hardaway at the University of Memphis (formerly Memphis State), where he heads the men’s basketball program.

Still, our biggest win might be making philanthropy a sport. That PGA Memphis Open? It began benefitting St. Jude Children’s Research Hospital in 1970. In 2019, it will evolve into the World Golf Championships-FedEx St. Jude Invitational, bringing the sport’s most elite players to Memphis, and donations to St. Jude. Since 2002, the St. Jude Memphis Marathon Weekend has grown to become the hospital’s largest one-day fundraising event of the year, engaging 26,000-plus participants who raised more than $11 million in 2018.

In other words, we’re game to celebrate our athletic achievements, and 2019’s the time: In our bicentennial year, the Memphis Sports Hall of Fame will debut inside AutoZone Park. 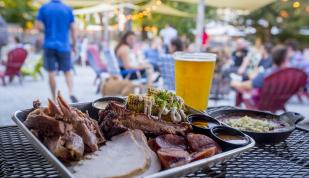 Why Memphis food tastes so good