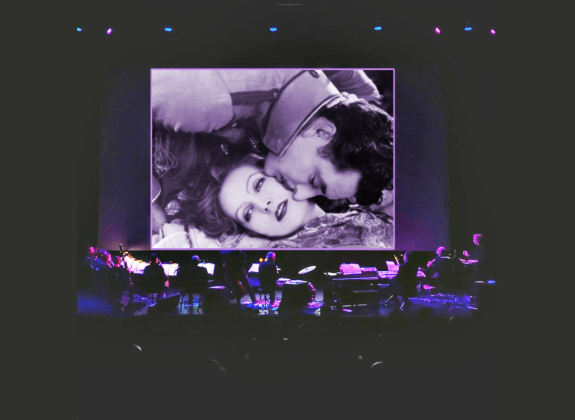 Gates open at 7:00PM and film starts at 7:30PM
Local musician and composer Alex Greene has worked for over a dozen years with the Rolling Head Orchestra, a sextet of some of Memphis' finest jazz players, performing throughout the region and recording soundtracks for film and television. In 2020, as a Resident Composer at Crosstown Arts, Greene composed original scores for two silent films, performed live by the Rolling Head Orchestra and classical collaborators Blueshift Ensemble. Special guest Kate Tayler Hunt also joined the group on the Theremin, an archaic electronic instrument first developed in 1920, lending an eerie element to the soundtrack's ambiance. In 2021, the same group performed Greene's original score for Buster Keaton's The Cameraman, to much acclaim.
Now, on June 30 at The Grove, the same group will perform all new original music to accompany Flesh and the Devil (1926), starring John Gilbert and Greta Garbo. Though the most risque thing in the film is its title, it does feature both the first horizontal love scene and the first close-up, open-mouth kiss in American movie history. Indeed, Garbo is at her most alluring here, and the growing real life passion between her and Gilbert at the time permeates their on-screen chemistry. The film follows Leo (Gilbert) and Ulrich (Lars Hanson) as their lifelong friendship is torn apart over their mutual love for the beautiful Felicitas (Garbo), with brilliant performances set off by Clarence Brown’s superb direction and William H. Daniels’s exquisite cinematography.
Set to the sultry textures of Greene's music, with echoes of Duke Ellington and Franz Waxman, Flesh and the Devil will be brought to life in a way few films ever are — with an ensemble of virtuosos performing the soundtrack as the film unfolds onscreen.