20 Wing Spots In Memphis You Have To Try

Locals will fight you over your barbecue preferences, but I'm pretty sure chicken wing restaurant loyalty could cause a generations-long blood feud. Don't take it from me though, you’ll have to try these Memphis wings for yourself.

The list is in alphabetical order. Keep scrolling for a map and a big list so you can plan your own trail! 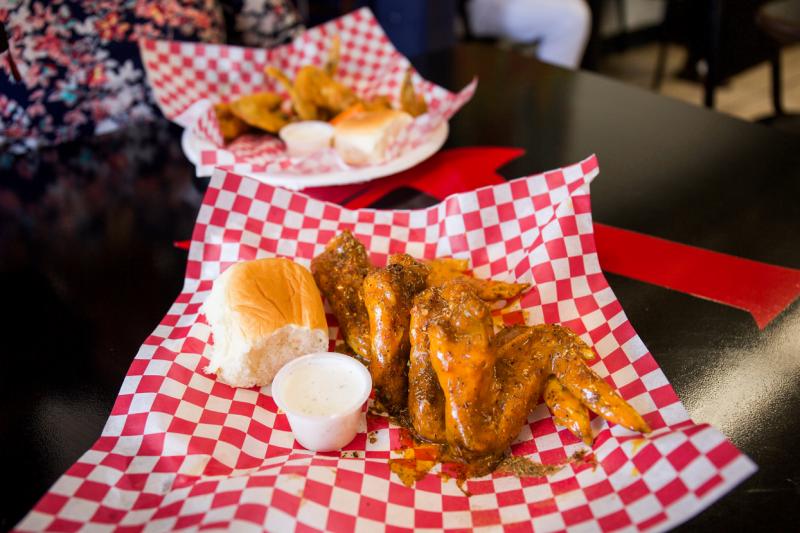 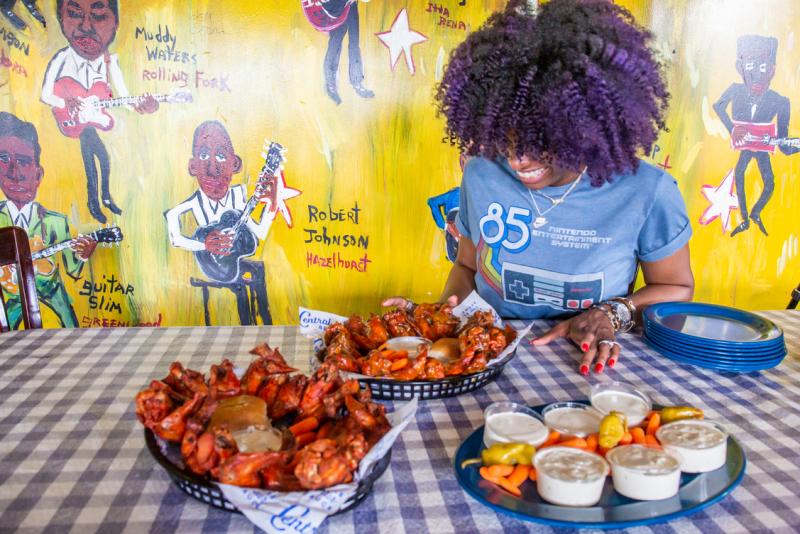 1806 Lamar Ave.
Honey gold wings are the Memphis flavor, but Als’s Wings and things on Lamar doesn’t stop there. They have more than 30 different flavors, taking all the elements of hot wing sauces (spicy, honey, super spicy, ranch, bbq, and seasoned) and mixing them in different combinations to make your taste buds dance.

1445 Jackson Avenue
It’s rare that a dive bar can excel in so many categories, but Memphians love Alex’s burger, barbecue ribs, and their delectable Greek wings.

2390 Summer Ave + 3995 Elvis Presley Blvd
They certainly have the SEO on lock at Best Wings of Memphis, and every level of spice intensity to choose from for their whole wings. Memphians recommend the honey glazed or honey glazed hot!

3824 Elvis Presley Blvd
Don’t let the long line discourage you: BJ’s is 100 percent worth the wait and the line moves fast. The flames painted on the building are not false advertising: these wings are fire!

“My go-to is the buffalo regular hot party wings with a side of fries and lemonade.That flavor is so good I don’t worry about any of the other flavors—Simply amazing.” - Milton H.

735 N. Parkway
Another top barbecue joint that also excels in the chicken wing category, Cozy Corner smokes their wings. You can get a combo plate with ribs and wings, too.

“Smoked wings at the Cozy Corner are better than any other in that style, as well. They’re the only not-fried smoked wings that have not-rubber skin” —Andrew M. 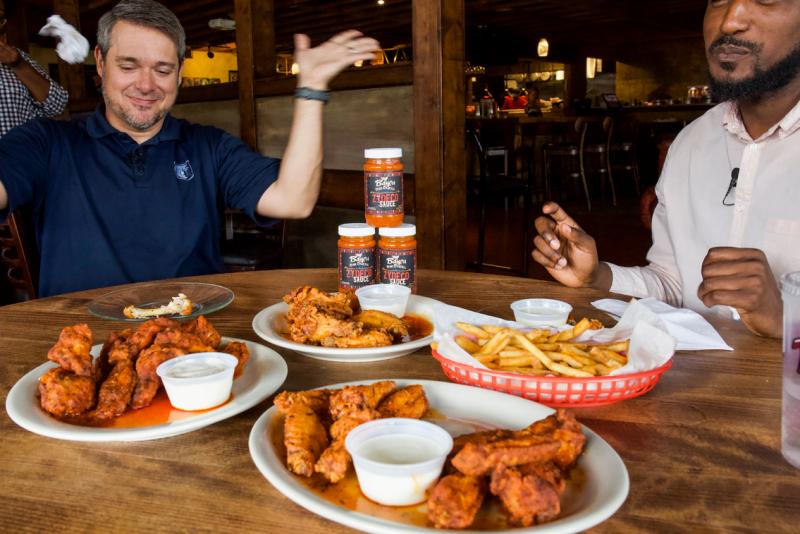 We swear by the Zydeco wing sauce at the Bayou. 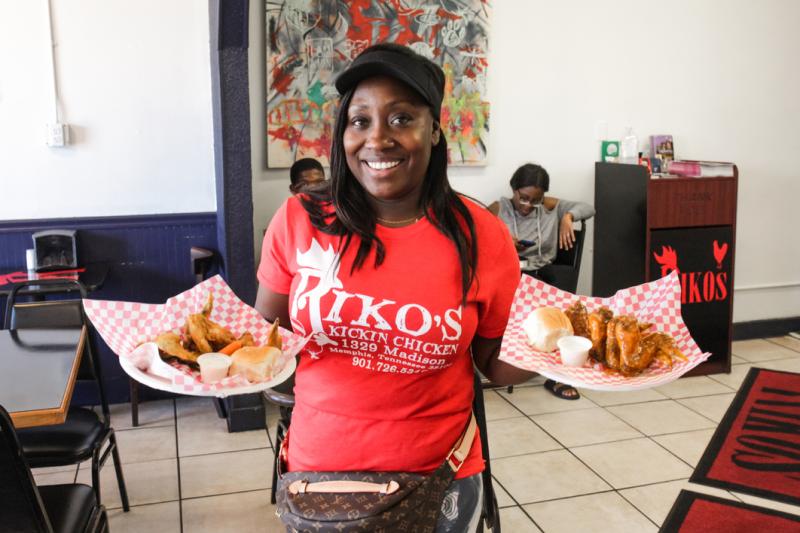 multiple locations
Good wings and good barbecue often go hand-in-hand, and Central proves it with their smoked wings. Always one of the top picks from locals, many of whom give Central their number one spot on the list of best wings joints in Memphis.

“Central BBQ wings are <fire emoji>. They’re smoked then fried. I like the jerk, my husband likes the wet.” - Brittany N.

“[Central’s] dry rub wings are truth and define what you can do with a good smoker + chicken.” - Marc K.

1264 Getwell Road
Memphis loves Ching's almost as much as Ching's loves the Memphis Tigers. After being pandemic-closed for most of 2020, Ching’s “Best Damn Hot Wings” has reopened, much to the relief of Memphis wing lovers everywhere

multiple locations
By all accounts, Crumpy’s is responsible for the thriving chicken wing scene in Memphis. Think of them as the grandaddy of Memphis hot wings—Edible Memphis has a fantastic story on their founder Donald Crump, his family, and the mark he’s made on our hot wing culture in Memphis.

“A Memphis classic. They have been doing it right for years, and they do whole wings.” —Caleb S.

7050 Malco Crossing Ste. 106 + 4407 Elvis Presley Blvd
Open since 1990 and with multiple locations, D'Bo's is a Memphis hot wing and buffalo wing must-try. They’ve won some awards—including the National Buffalo Wings Fest in 2011— and they also have frozen daiquiri machines at some locations. Win-win-win.

multiple locations
A Memphis institution known for legendary late-night drive thru lines, Dixie Queen’s wings can be polarizing: are they amazing or are they overrated? Are they good because you can get them at 2 a.m. or are they elite any time of day? Their popularity and controversy means that this stop on the Memphis Wing Trail is one you’ll have to judge for yourself.

Multiple locations
A spinoff of the elite Crumpy’s hot wing dynasty, Don Don’s comes up frequently in “best wings in Memphis” conversations among locals. Add it to your Memphis Wing Trail list and try all the sauce flavors. 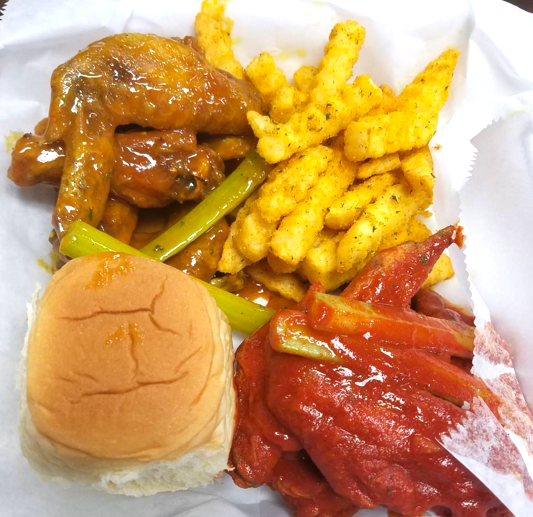 Ching's Wings says they are the "best damn hot wings" in town. Only you can decide if they're right.

multiple locations
Though the name says "buffalo", Mr. P's has a variety of spicy, sweet, and seasoned options for flavors and 25 years of experience feeding hungry Memphians some of their favorite hot wings.

This food truck will make all your best Memphis hot wing dreams come true—we aren’t officially ranking this list but let me whisper this: NWO food truck was in the top 3 most mentioned in all our polls about wings.

The owners worked tirelessly to absolutely perfect their recipes (they’re four-time WCHWCF champs) before opening the truck in 2018. They move this food truck around all over town slinging immaculate Memphis chicken wings with a big variety of sauces.

“Ring of fire with reaper powder for more spice. Spicy Garlic and always try the flavor of the month. No need to look any further.”- Dianna W.

1329 Madison Avenue
Riko's started out as food truck in 2014, but their juicy wings and decadent sauces demanded a brick-and-mortar location within three years. They’re known for big, bold sauces, a creative menu, and weekly deals and specials. Locals appreciate that everything is made super fresh and the wings are cooked impeccably.

1674 Whitten Rd. + 8936 Airways Blvd (Southaven)
We love a good lunch specials, and Supreme Hot Wings provides. That and their consistently tasty chicken wings probably why their name keeps coming up when we talk about the best Memphis wing spots.

3633 Millbranch Rd.+ Uncle Lou’s Express truck
Uncle Lou’s made a name for itself with sweet ’n’ spicy Southern fried chicken and honey biscuits—and the whole wings and party wings on the menu are along the same lines, aka delicious and popular.

“Uncle Lou’s wings are one of my favorites that I couldn’t live without.Delightfully yummy mix of crunchy, sweet, and spicy.” —Tanda G.W.

2280 Park Avenue + 7395 Hwy 64 Ste. 103
There are hot wing spots called “Wing Factory” all over the place, but we are talking here about the Memphis original in Orange Mound since 2005 and its sister location out east. Amazing honey gold sauce? Check. Lemon pepper seasoned wings? Check. A really hot sauce with a reference to danger in the name? Check (Their version of a “suicide” sauce is called the 911.) This is a quintessential Memphis wing spot.

“It was delicious. It’s the thing you dream of when you get off work on a Friday. The best.” — Matt H.

multiple locations
Unique flavors and high quality ingredients make this local chain a top winner for best Memphis hot wings. Again, no official rank to this list but I’d be wrong to not admit that Wing Guru is consistently the most common answer to "where are the best wings in Memphis?” across multiple polls. I’d also be wrong not to share a common comment even their biggest fans will make—Wing Guru can be on the pricey side. But really, who can put a price on perfection?

“Lemon pepper best anywhere, and I don’t even like lemon pepper—but I’ll eat theirs.” Tanya F.

“Wing Guru is hands down number one; their wings are the perfect size and honey 'suicide' is life-changing. Bonus points for their new namesake ranch that just hit the menu.” - Sarah B. 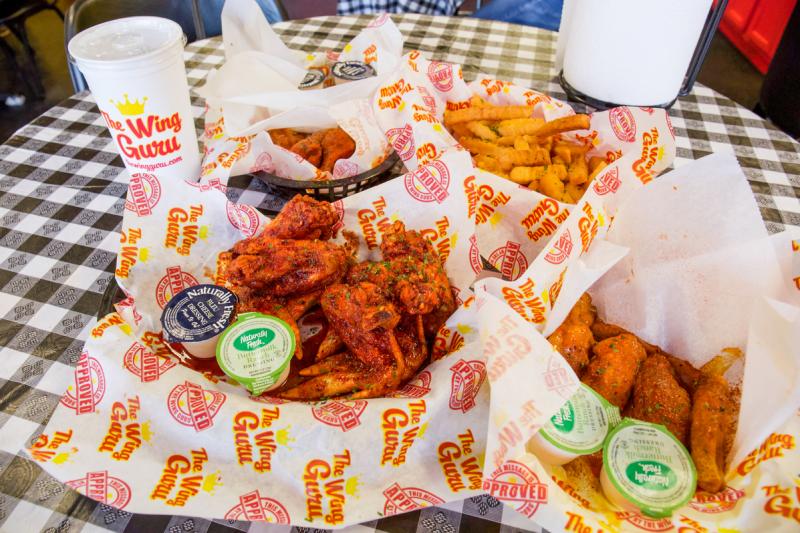 Wing Guru: definitely a top contender for best wings in Memphis, according to locals. 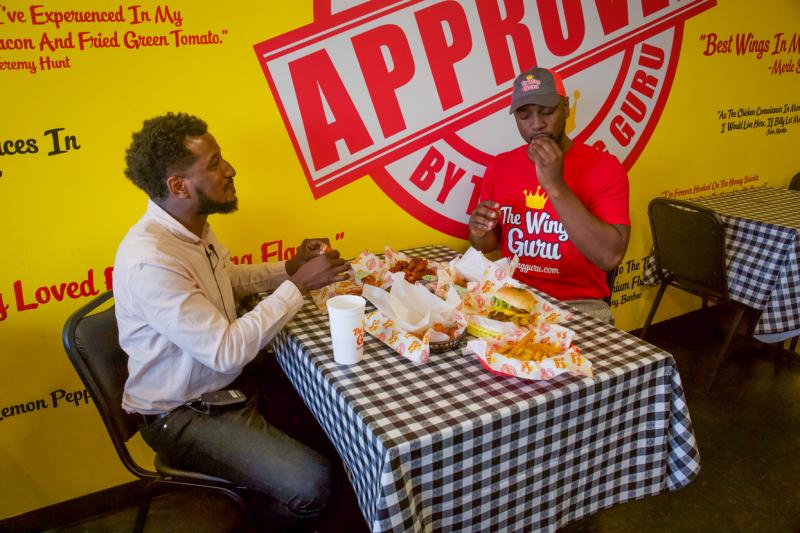 This Google map will guide you on your quest for delicious Memphis hot wings. When a restaurant had multiple locations, we included just the original or "main" location on the map.

Additional thoughts on the map? Let us know.

How The Memphis Hot Wing Trail Was Created

This list was created by polling blog readers and followers on social media, talking to experts and opinionated wing lovers, and research aka eating and interviews. The wing spots that were mentioned most consistently across multiple polls make up the top spots. Comments included are real comments from real people and their real names from the I Love Memphis Food Facebook Group's many discussions about wings.

And because we know there are probably more Memphis wing spots than BBQ restaurants—literally hundreds of places—we've also included a big ol' list of everyone else so you can try alllll the wings and make your own list of the best wings in Memphis and the Mid-South. If you have one you want added to the big list or want to make an argument for why a restaurant should be a top pick, let us know as nicely as you can! If you hate this list and want to set me on fire, feel free to make your own list!

A final note, let's pour one out for a few popular wing spots that are no longer with us: R.I.P. to Bosses, Midtown Crossing Grill, and Dirty Crow.